I’ve covered SwinSID micro and nano few times before. It’s a great idea – a micro controller based SID chip replacement, working as a spare part  for a C64 or C128, or as a substitute to some other application like a DIY-synth. For Commodores, it’s especially suited for a gaming machine, as only very few games feature such tricks that would not sound about right on the SwinSID.

However, there’s this downside with the SwinSID that it does not support analog controllers. This is because it’s the SID chip that handles the reading of analog controllers in the C64, and the A/D converters are not implemented in the SwinSID. The number of games supporting paddles, mice or analog joysticks is not that big, but still it’s a shame that they won’t work with SwinSID. Also the few games that support second joystick button are affected. They behave as if the second button would be triggered constantly.

So there is a lack of fully featured replacement for a SID chip. This is a shame as SID chips are sought after, and supply for good and working chips is getting more and more scarce. The demand of SID chips have been recognized, as it’s not that difficult to find a supply of SID chips from Asia. It’s just that many have found out that these chips are often dead, faulty or downright fakes, and often rebadged.

Knowing that there are a lot of these faulty SID chips with bad filters or missing sound channels, it had occurred to me that maybe these could be combined together with SwinSID to make at least a fully featured replacement for the SID chip. Sound from the SwinSID, and A/D converters from an otherwise faulty SID.

Recently I ordered some spare parts from Mutant Caterpillar Games, who have a selection of chips for 8-bit computers in stock, including SID chips. As we were talking together with Ian Gledhill about SID sourcing challenges among other things I mentioned this idea of mine. He kindly sent me few faulty rebadged SID chips to test it out.

So, off I am to build an adapter that allows me to install SwinSID and a ‘badSID’ to the C64. END_OF_DOCUMENT_TOKEN_TO_BE_REPLACED 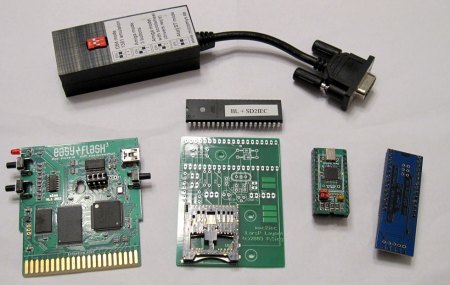 Just a quick heads-up, I recently ordered some stuff from Retro-Donald’s Sinchai-Shop. Finally the goods arrived, and above you can see the loot I got.

Sinchai.de is an online shop that is specializing in Commodore 8 bit accessories and DIY kits. Unfortunately the site is in German only, as is all communication and support. Additionally the information and instructions for the products may be very slight, and most of the product support seems to be at the German C64 forum Forum-64. The shop supports the community there and vice versa it appears.

At least the product assortment is very interesting, and they ship worldwide. And Google Translate is your friend if you are like me and don’t speak nor read German.

Apart from the language barrier and almost three weeks’ delivery time I’m very pleased with the experience. Might be that Donald is busy putting the now-released EasyFlash 3 boards together! The pieces I finally got are of good quality, and the packaging was well done. Postage rates were reasonable, and generally, so are the prices at the shop. My recommendations.

Quick run-down of the stuff I ordered END_OF_DOCUMENT_TOKEN_TO_BE_REPLACED

This is my C64 tower. It has been built nearly 12 years ago by me and a friend of mine. It has seen it’s best days long time ago, but now I’m about to make it better than it ever was.

Built into the old IBM case is a C64E motherboard (the new, short board) from a late C64 C and a much older 1541 disk drive. Basically the machine is an original hardware setup – including the original power supplies. The C64 motherboard is mounted horizontally at he bottom of the case. The C64 PSU is attached to the flank of the case – not very discreet I know. The drive mechanics of the bulky 1541 drive fit perfectly to one of the 5 1/4″ drive bays. The motherboard (or logic board) and transformer have been relocated around the mechanics.

An external power cord plugs into the rear of the machine. The mains voltage is routed to the original transformers trough a two-stage switch and fuses. The two stage switch makes it possible to power the C64 without starting up the disk drive and also to switch off the 1541 while C64 remains on.

The obvious issue of keyboard was also solved in a rather straightforward manner. The keyboard ribbon was simply cut, and then wired to the PC’s serial port connector at the back of the machine. An extension cable for the keyboard was done from old printer cable, which then plugs into the port. Not pretty but does its job!

The other necessary connectors were also routed to the back of the machine. A composite video, dual mono audio and RF antenna connections were routed to the added back plate of the machine using RCA plugs. The transparent back plate is in place of the missing PC PSU. Joystick ports are available at the bottom, as the motherboard barely fits inside the case.

The C64 and 1541 use the case’s power and HDD LEDs as their power LEDs. The power button of the case acts as a reset button for the C64. END_OF_DOCUMENT_TOKEN_TO_BE_REPLACED