Graphics with old C64 colors and how to view them

Continuing presenting some of the graphics I’ve done for the Commodore 64, this article revolves around my latest picture and how to view it – in technical sense.

This picture is a bit different, since it’s made for old PAL C64 with so called “old lumas”, which I covered in my previous post. In other words I’m making use of the slightly different color palette found in early C64s. And not only the palette, I’m also exploiting the color bleeding introduced by the PAL color encoding. The result is that the picture appears to be more colorful than one might expect from the 16-color palette of a C64.

This picture requires a specific hardware setup. Namely a PAL C64 with early 6569R1 VIC-II chip. A real C64 is needed, or alternatively, an emulator or viewer that can simulate the effect of PAL color encoding/decoding while supporting the old lumas. The reason is that with this picture I’m exploiting color bleeding together with the different color palette. 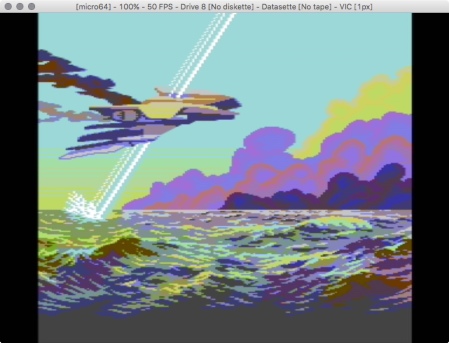 Working on this piece started on Excel. I wanted to have a proper palette for the old luma colors, so I ran the same calculations that Philip “Pepto” Timmermann has made, but using the old luminance values. This way I got an old luma version of the so called pepto palette. A link to palette at the end of the post.

Having the old luma palette worked as the basis for creating a good estimate of the available 70 colors that could be created using old PAL VIC-II and color blending. Please refer to my previous post about the theory and explanation about the palette of 70 colors.

Some tests done on real machine confirmed that the idea works, and those 70 colors should, theoretically, be possible to be had on screen. My initial tests went so well that I could start drafting the picture using my estimated 70-color palette.

A major consideration was the workflow to use. How to make a picture that has colors that don’t exist? Most of the colors seen in the final picture are a result of the aforementioned PAL color blending.

An obvious choice would have been to use a real machine or emulator with PAL emulation and some native C64 drawing program. That would have given me a real-time preview on how the colors blend on each other. Nevertheless I wanted to go with my usual tool chain where GrafX2 and its support for layers have a central role.

This gave me the possibility to actually draw the picture first using that 70-color palette. What followed then was a laborious process of converting the mixed colors into line-dithered 16 C64-colors. And no, I didn’t have any automated tool available for that. Just manual time consuming work that I had to preview using either emulator or my old PAL C64.

I guess it was the hard way after all. Maybe I wanted to prove myself that I can pull it off or something. Never again! Luckily the work paid off. This picture competed at the ZOO 2015 graphics competition and took the first place!

Viewing the picture the way it’s meant to be

If you want to view this, or any other picture specifically made with the old C64 colors the way they are meant with an emulator, be sure to set it up correctly. Most important thing is to set the old colors. Here’s a comparison how my picture looks with “normal” pepto palette, and the modified old luma pepto palette:

Here it’s just the difference between the two color palettes. These pictures are from graphics editor, without any effects from the PAL color blending, or any other real environment effects.

Missing from above is the color blending, an effect that happens on real PAL C64 where colors blend into each other vertically. It’s a phenomenon you can’t avoid with real C64, but needs to be emulated on modern computer environment.

Example of how different emulating settings affect the picture. Example made using View64.

How the color blending is implemented differs from emulator to emulator. Thus, I used mostly a real C64 for previewing the picture while I worked on it.

Anyhow, some emulators get it pretty close. Below is couple of examples of emulators and viewers that succeed displaying my picture “right”.

VICE has PAL emulation, though it’s labelled as CRT emulation under rendering filter, and comes with scanlines in addition. There is also a setting for old luminances to be found from different locations depending on VICE version, and it may or may not work depending on other settings. Using external palette disables the old luminance setting for example. Ideally switching between old and new colors would be done under model settings (C64 PAL / C64 old PAL) but if it really works or not is up to other settings.

All in all, VICE can handle it, but the scattered options for emulated screen output are a bit of a mess.

Micro64 is a very nice and straight-forward cross-platform emulator for Commodore 64. It has got a plethora of options, one of the most interesting being its extensive display emulation. With micro64 you can easily get the old time’s analogue look and feel back.

The full-blown GPU-accelerated PAL emulation takes the amount of settings to crazy level with all kinds of interferences included. And the strength of all of the effects can be scaled to your liking. 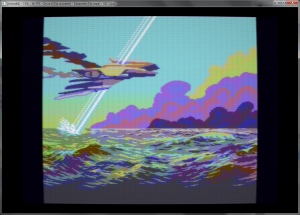 FULL PAL emulation with settings as above, but with added stuff including slight screen deformation.

Emulator user interface and all the settings can be found with a press of F9 key. Option for old luminances is easily found under Video settings.

View64 is not a C64 emulator, but at viewer for C64 image formats. It also has an excellent emulation of different viewing setups. Using View64 it’s easy to compare how different decoders affect picture aspect ratio and color behavior. PAL and NTSC are two different worlds with their different aspect ratios and color bleeding. RGB decoder shows how the typical “emulator look” compare to the real PAL or NTSC signalling.

Interestingly View64 incorporates a setting for chroma noise. It brings that characteristic C64 checkerboard pattern to your PC’s screen. In addition there are on/off settings for scanlines, CRT shadow mask and monochrome mode. Recent version 1.59 added support for old luminances.

As View64 is a C64 image viewer, the pictures you are going to open in it need to be actual C64 image files. View64 shows nicely how different C64 environments affect the picture output, so go ahead and download this and the Out Run Memories picture in Koala format to try things around. Link at the end of the post.

Video capture from a real machine

As you can see from the screen shots above, the outcome varies a bit from one software to another. A video capture from a real C64 would make a great reference point. Luckily there’s a proper one available thanks to Lemming of Finnish Gold

This entry was posted on Saturday, April 9th, 2016 at 18:16 and is filed under Commodore 64, Pixel Art. You can follow any responses to this entry through the RSS 2.0 feed. You can leave a response, or trackback from your own site.