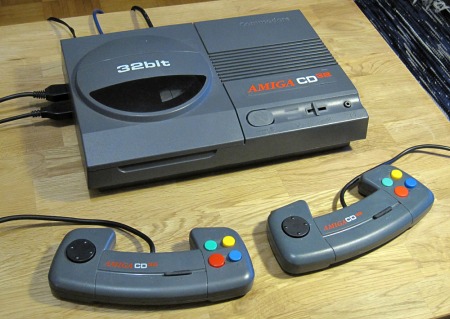 Some time ago I got myself this piece of Commodore history. The Amiga CD32 is a CD-ROM based 32-bit game console from Commodore released in 1993. As it turned out, the CD32 ended up being the last machine from Commodore before the company went bankrupt.

Made in somewhat similar manner as the infamous Commodore 64 GS, the CD32 is basically an Amiga 1200 with CD-ROM drive dressed up as a game console. This made the CD32 quite powerful platform by the time of its release – at least compared to its 16-bit console rivals. According to various Internet sources, the CD32 sold well at first. After all, it was the first 32-bit console and the first CD-based games system in the Western countries. However, CD32 was doomed to failure even without Commodore going out of business only half a year after its release for various reasons. END_OF_DOCUMENT_TOKEN_TO_BE_REPLACED