SIDs are sought after sound chips. Being semi-analog they are difficult to emulate. They also break easily from e.g. static discharges. If one is to build a SID synth or you need to replace broken SID chip you may have trouble finding the chips.

SwinSID is a project that I have been keeping an eye on for many years now. Swinkels, the man behind the project, has been prototyping and developing a SID compatible custom sound card for C64 or other SID-utilizing devices such as MIDIbox SID.

Originally the SwinSID was not aiming to emulate a real SID chip but rather to be a pin-compatible SID-like sound device with some enhancements. The hardware is based on one or two (stereo) Atmel AVR microcontollers and some additional circuitry including a DAC.

But now Swinkels and Crisp have developed a new model of a different goal. It is called SwinSID88, or Micro SwinSID, and it’s a direct replacement for the SID chip. It is mono only and it aims to emulate the sound of 8580 SID chip as good as possible.

The new model is based on physically smaller ATmega88 microcontroller, hence the name SwinSID88. SwinSID88 runs in 32 MHz clock rate which has enabled higher sampling rate of 41,6 kHz. The major difference to previous SwinSIDs is however that there is no longer a DAC – the microcontroller generates the audio directly! The design is such that you can put it in place of SID chip of any C64 model and it works just like that using C64’s audio output.

Smaller parts and the reduced amount of needed components overall have made it possible to make the Micro SwinSID board very small. Also the needed parts are very affordable. What this means is that Micro SwinSIDs can be manufactured and sold as functional SID chip replacements with reasonable price. I got mine fully assembled and programmed from Sabbi of C64.CH.

Sabbi’s board is little different from Crisp’s design. Volume level can be adjusted to match C64 model using a jumper.

Does it sound anything like a real SID chip then?

Yes it does. I am a SID fanatic and a purist, but I’m still very exited of the new SwinSID – it’s far from bad! Without side-by-side comparison with a real chip it sounds quite like 8580. Music designed for the “new” 8580 SID chip usually sounds right on the SwinSID88. Also sounds and music that are not relying on special characteristics of either SID model usually sound like they would on a 8580. This is the case with most games. Songs that make use of 6581’s special characteristics will sound wrong. But unlike on a real 8580, digi samples play loud and clear on SwinSID88.

I was positively surprised that some SID-tricks worked on SwinSID. Vicious Sid and Cubase64 do work. Fanta In Space works, but does not sound completely right. Echofied 6581 works, but there is awful noice in the background. Music made with Polly Tracker is total garbage.

So SwinSID behaves different from a real SID chip, and in some occasions it can produce noices that should not be there. I also noticed some timing weirdness occasionally. Some SID functions are not present at all, so analog controllers or external audio filtering are not supported.

What is not working well or at all:

The new SwinSID is very interesting, impressive and welcome device. The compatibility with real 8580 SID chip is already good and there will be development towards even better combatability I’m sure. SwinSID can be updated by reprogramming the AVR.

What is important is that Micro SwinSID can be put directly into SID socket and it works – no matter which C64 model you have. C64 with SwinSID is 100 % better than a C64 without sound. 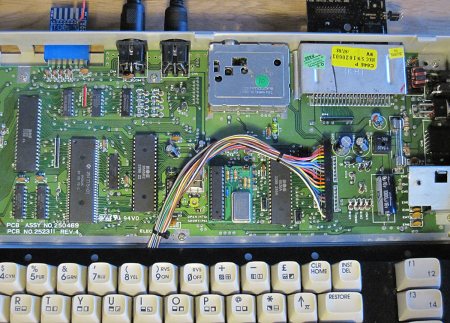 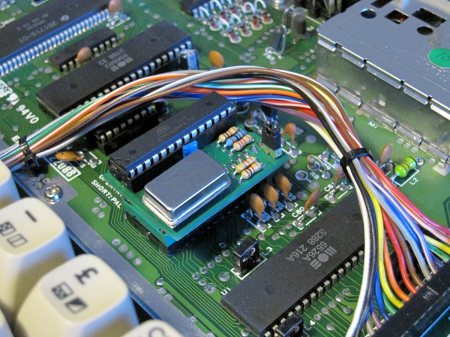 This entry was posted on Sunday, November 21st, 2010 at 20:45 and is filed under C64 Hardware, Commodore 64, SID. You can follow any responses to this entry through the RSS 2.0 feed. You can leave a response, or trackback from your own site.

3 Responses to Micro SwinSID – an AVR based SID replacement